Women are still being sidelined for leadership roles in 2019, a revealing new report has found.

Conrad Liveris, one of Australia’s leading employment and workplace experts, has released new stats that show the number of female CEOs in ASX200 has fallen.

According to Conrad’s fifth iteration of Gender Equality at Work, we still have a big problem when it comes to women being sidelined for leadership roles and promotions in favour of their male colleagues. Gender Equality at Work exposes what is at the heart of this promotions-gap, which compounds and exacerbates the differences in opportunity for men and women at work.

This year, the theme for International Women’s Day is #BalanceforBetter, and gender equality in the workplace has been front and centre of attention. But what exactly is happening behind the closed boardroom doors of Australia’s biggest companies in 2019?

When it comes to women in leadership, we’ve gained ground, while also losing some hard-won territory.

The number of female CEOs in Australia has fallen from 12 to just 11 in 2019. The graph below, which shows the zig-zag nature of women CEOs in the ASX200 “suggests an upward swing and increase in women in those roles over the next 24 months,” says Conrad. Despite this overall upswing, the reality that keeps hitting home for many women in business is that women in CEO roles remain in the extreme minority.

To put this in perspective, men named Andrew are 27% more likely than women to be ASX200 CEOs. 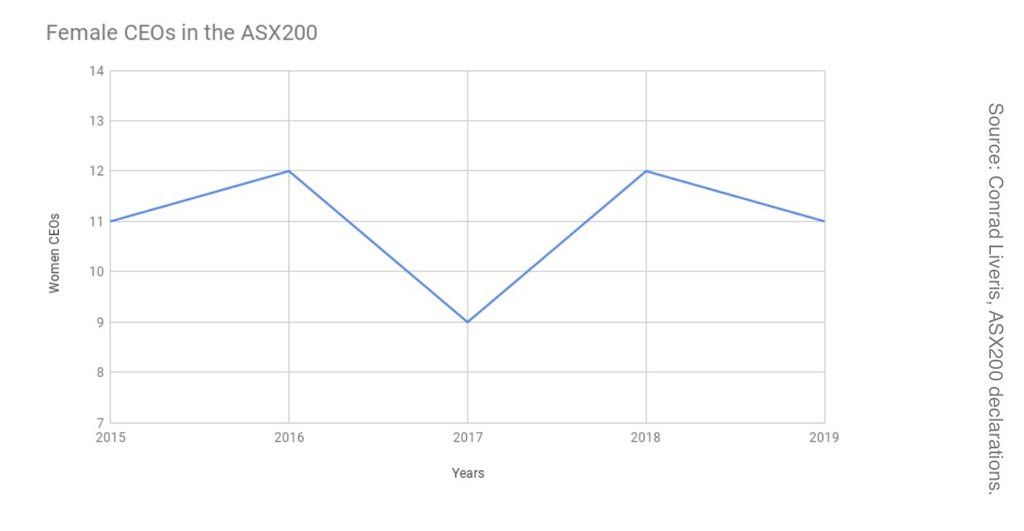 According to the report, “women remain exempt from almost all business unit roles, which are the traditional training ground for CEOs, with men holding 90% of these positions.”

Gender Equality at Work says: “As of now, there are 14 companies chaired by women, 13 by men named Peter, and 11 by both men named John and Michael. The number of female-chaired companies has increased from 12 last year and 10 in 2017.”

But it's not all bad news. There are record-high numbers of women entering into directorships on ASX200 boards, currently at 29.7%. Further, the number of female CFOs has increased too, with the report noting that today, 24 women are CFOs of ASX200 companies.

Why women miss out on promotions

“This is likely because of the training ground and peer-observance that boards offer through committees and chairs of those committees. Essentially, future chairs, if elevated from within as is normal, are known quantities,” says Conrad.

Translated, this means that individuals who are put up for promotion usually come from within tight-knit inner circles, where mostly men (and only a small number of women) exist.

“Executive appointments are usually done on the advice of consultants and the board with the CEO; it is reasonable to conclude that women are being sidelined from business unit roles and in more business-wide roles as a step to directorships,” the report says. 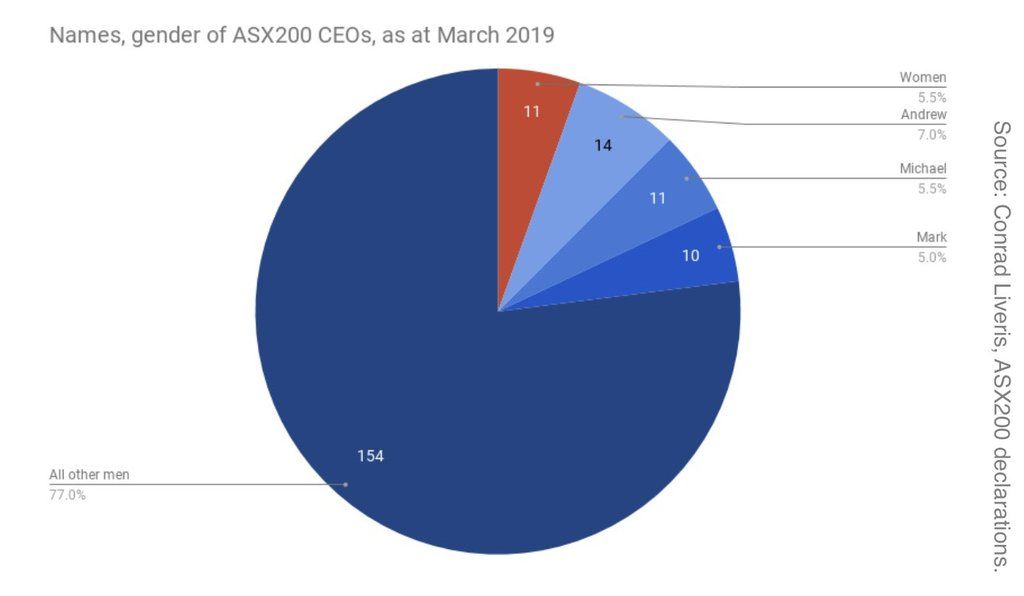 So, is there hope for women in the workplace?

While the past 12 months reveal some marked successes, it has also seen some challenges in the pursuit of gender equality at work. Overall, gender equality continues to move at a glacial pace, dampening Australia’s ability to advance to its full potential.

The number of women CEOs on ASX200 boards has only ever hit a record high of 12. Currently, we sit all 11. Usually, when we look at data, the loss of a single entity doesn’t carry that much weight. However, in a crusade where each link in the chain adds to its strength, a single break can impact the strength of the whole movement. As Conrad points out, “this shrinkage becomes a reminder than even one woman matters”.

What we can take away from all this?

When the pace of progress is this slow, it can be difficult to believe that real and lasting gender equality in the workplace is really on its way. In some respects, Conrad’s statement can be read as a bleak reminder that our grasp of power in the workforce is flimsy.

Read in another light, however, this statement may reinvigorate us. Perhaps it can serve to remind us of the power of the individual; giving us the boost we need to keep pushing each other and ourselves forward, remembering that each individual woman’s win is a gain for us all.

Being part of a community of women who are helping each other succeed is good way to keep the light shining on women in the workplace. At She Mentors, we work hard to empower, support and connect women in business through our and our Members' Club, a platform that connect mentors, experts and peers.

If you need somewhere to go for solid advice, and you’re ready to empower other women on their journeys, then request to join The Members' Club.

We ask all members to complete their profile before taking part in The Mentor Hour. This ensures that you are available to help others, should they need it.

You have already booked this month

All mentor hours reset on the 1st of the month.